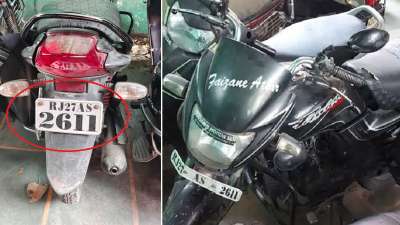 A new revelation has come to light in the case related to the murder of Kanhaiyalal in Udaipur. The murder of Kanhaiyalal was a well thought out conspiracy and now the jihadi thinking of the accused has also been exposed in this whole case. Riyaz's hatred can be gauged from the fact that the number of his bike was 2611. This number is associated with the date of Mumbai terror attack.

According to reports, Riyaz had also given a bribe of Rs 500 in the RTO to get the number 2611. On this bike, he had come with Gauss to kill Kanhaiyalal. In such a situation, the number of the bike is indicating that he was affected by the Mumbai terror attack.

Riyaz, accused of murder, had bought this bike in 2013. It is being told that Riyaz was very much attached to this bike named RJ 27 AS 2611, so he also came with Gauss from the same bike to do the murder. After this, both of them fled on the same bike. Although the police have now confiscated the bike, but the investigating agencies are engaged in gathering the facts and the story behind this number. At present, the court has sent both the accused to Ajmer High Security Jail.

After committing the crime, both of them escape from there on a bike which has been confiscated by the investigating agencies.

Both these accused considered ISIS as their role model. Both often used to watch videos of ISIS and Taliban. They consider Hindus to be infidels and for the purpose of spreading panic in them, when stones were pelted in many parts of the country after Nupur Sharma's statement, they felt this is the best opportunity to become a hero of their religion. After Kanhaiyalal's reaction to Nupur Sharma's post, he considered Kanhaiya as the easiest target. Although there were many big people on their target but they were far away from their reach.