The injured passengers have been admitted to the emergency room of SN Hospital, Agra, out of which four are seriously injured. 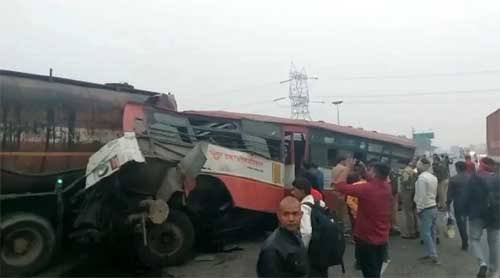 Two passengers were killed and dozens of others injured on Thursday morning when a Uttar Pradesh Roadways bus rammed into a moving tanker on the national highway near Kuberpur within the limits of Etmadpur police station in Agra district. The injured passengers have been admitted to the emergency room of SN Hospital, Agra, out of which four are seriously injured.

The accident in Agra comes days after a sleeper bus crashed on the Agra-Lucknow Expressway in Etawah district. On 23 October, the sleeper bus was going from Gorakhpur to Ajmer in Rajasthan. Four people, including a seven-year-old child, were killed and 46 other passengers were injured in the accident. The accident happened around 2.30 pm. Uttar Pradesh Chief Minister Yogi Adityanath has condoled the death of the people and has ordered the district administration officials to give proper treatment to the injured.