2 killed in violence after namaz in Ranchi: Police fired after stone pelting occurred around Temple 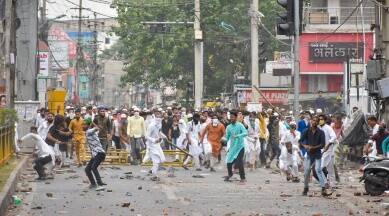 Violent protests erupted after prayers in Ranchi on Friday over controversial remarks on the Prophet. The police had to open fire due to arson and stone-pelting. A 35-year-old man died in this firing. Late-night there is news of another person's death, although the administration has not confirmed it. 7 other people have been shot. More than 12 people have been injured.

During the demonstration, the miscreants also pelted stones at the police. 3 policemen including SSP have received injuries. The miscreants also attacked the vehicle of the Bihar government's road construction minister Nitin Naveen, who came to Ranchi. He is a minister in the Nitish government from the BJP quota.

During stone pelting, some people tried to hide in the Mahavir temple. After this, the protesters also pelted stones at the temple. This incident also angered Hindu organizations and they took to the streets. After this, precautionary section 144 has been implemented in Ranchi. However, earlier it was being said that the administration has decided to impose a curfew.

Internet facility in Ranchi has been suspended till 6 am on Saturday. In the late evening, Hindus started reciting Hanuman Chalisa in the Mahavir temple. However, the administration sent these people back home after talks.