In the third wave of corona epidemic in the country, the total number of active cases in the country has increased from 1 lakh to 8 lakh within 11 days. On Monday, more than 1 lakh cases were reported for the fifth consecutive day. 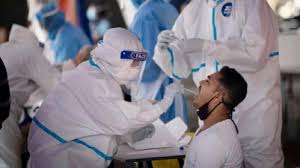 On Monday, 69,798 people were cured, while 277 people died. The good thing is that in Maharashtra, Delhi and West Bengal, which became the most worrying, the number of new cases has also decreased on Monday, but in the election state of Uttar Pradesh, new cases continue to rise.

In view of the increasing infection of Delhi's Corona, CM Arvind Kejriwal will hold a press conference. In this, the situation of Corona in the capital will be reviewed. A big decision can be taken on strictness in Delhi during the press conference to be held at 12 noon.