The India Meteorological Department (IMD) has issued a red alert for Mumbai in the backdrop of heavy rains, a BMC official said 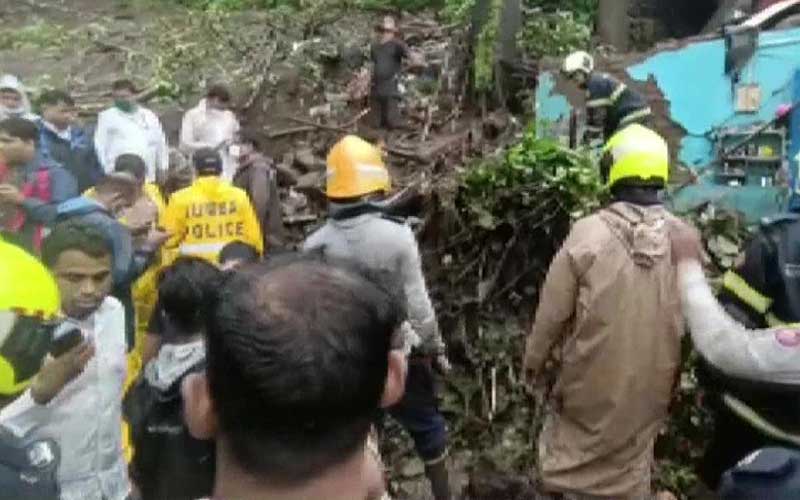 As many as 15 people have been killed in two separate incidents of landslides in Chembur's Bharat nagar and Vikhroli area according to the National Disaster Response Force. The landslides were caused by heavy rain that lashed the city and its suburbs for several hours last night and today.

At least 11 people were killed after a wall collapsed on some shanties in the Bharat Nagar area of Maharashtra's Chembur due to a landslide, the National Disaster Response Force (NDRF) said on Sunday morning. A rescue operation is underway.

Two bodies have been recovered by NDRF from the debris (in Mumbai's Chembur). 10 bodies were recovered by locals before the arrival of NDRF personnel. At least 7 more people are feared trapped, said NDRF Inspector Rahul Raghuvansh.

In another incident, as many as three persons were killed after a ground-plus-one residential building collapsed in Mumbai's Vikhroli area in the early hours of Sunday, as per the BMC. The NDRF is carrying out a rescue operation.

Moreover, rainwater has caused water logging in many areas. Water has even entered houses in Hanuman Nagar, Kandivali East area of Mumbai. The suburban train services on both Central Railway and Western Railway in the financial capital were suspended due to water logging in the tracks due to the overnight downpour.

According to Brihanmumbai Municipal Corporation, Tulsi lake which provides 18 million litres of water to Mumbai in one day, started overflowing due to rains.

The India Meteorological Department (IMD) said that till 6.30 am on Sunday, Mumbai and adjoining areas received over 120 mm rainfall in preceding 12 hours. Moreover, Mumbai would receive "heavy to very heavy" rainfall at a few places with extremely heavy rainfall at isolated places, the IMD said. The India Meteorological Department (IMD) has issued a red alert for Mumbai in the backdrop of heavy rains, a BMC official said.