Union Minister of I&B Anurag Thakur will start off the grand celebration that will attract participation from across the country under the overall spirit of “Jan Bhagidari and Jan Andolan'' The objective is to showcase the journey of New India and celebrate the contribution of freedom fighters including the ‘Unsung Heroes’ of the freedom struggle through massive outreach activities. 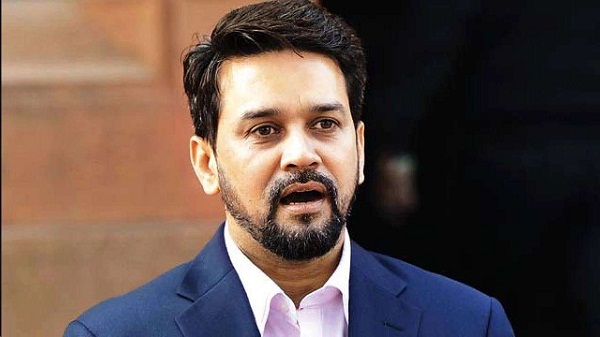 New Delhi: Union Ministry of Information & Broadcasting is all set to launch a gamut of activities to celebrate 'Azadi ka Amrit Mahotsav' from 23rd to 29th August, 2021, under its Iconic Week celebrations. Union Minister of I&B  Anurag Thakur will start off the grand celebration that will attract participation from across the country under the overall spirit of “Jan Bhagidari and Jan Andolan'' The objective is to showcase the journey of New India and celebrate the contribution of freedom fighters including the ‘Unsung Heroes’ of the freedom struggle through massive outreach activities.

According to the information, one of the key aspects of the synergistic celebration is 360-degree outreach through traditional means such as cultural programs, nukkad natak and TV programs as well as innovative means of digital/social media. All India Radio’s daily capsule “Azadi Ka Safar, Akashvani Ke Saath” will be reaching schools and colleges across India through collaborative efforts of the Directorate of Information and Public Relations of various States and regional offices of the Ministry. A series of special programs to be launched by AIR Network include Dharohar (speeches of freedom leaders) and Nishaan (75 landmark sites to be showcased), Aparajita (Women leaders).  DD Network will be broadcasting sectoral programs under “Naye Bharat Ka Naya Safar” and “Journey of New India” covering themes such as Diplomacy, Digital India, Legislative Reforms, etc. apart from ongoing daily special news capsules on Unsung heroes and Freedom Struggle.

Screening of Iconic Films will be a special feature of the Iconic week celebration. DD Network will showcase a series of documentaries such as “Netaji”, “Merger of princely states”, etc. Popular Indian films such as “Razi” will also be telecast. NFDC is also organizing a film festival on its OTT platform www.cinemasofindia.com screening a specially curated bouquet of films such as “Island City ”, “Crossing Bridges” etc. Other key highlights include an Online Interactive session for film students and enthusiasts by NFDC, and a webinar on “Technological Advancements in film making” by Films Division.

To add to the fervour, a series of other online film festivals such as "India@75: Voyage of Progress" and "India@75: Icons of India" will be held from 23rd to 25th August 2021 and 26th to 28th August 2021 respectively by the Films Division. The Directorate of Film Festivals (DFF) is collaborating with the Ministry of External Affairs to screen films at various Embassies of other countries in India. NFAI will mesmerize patrons through a Live Virtual Film Poster Exhibition on Classic Cinema to be held on the NFAI website from 23rd to 29th August 2021.

The Bureau of Outreach and Communication will also reach out to the people through nukkad nataks, skits, magic shows, puppetry, folk recitals through more than 50 Integrated Communication and Outreach Programmes by ROBs and more than 1000 PRTs by Song and Drama Division across the country. Further, BOC will launch an eBook on 'Making of the Constitution which will be available on its website. Enthusiastic readers can also find informative and exciting books on related themes at Publication Division book galleries across India.

Young patrons can also enjoy interactive activities, quizzes and competitions across social media platforms of the Ministry, along with audiovisual glimpses of the freedom struggle and the New India.

The Iconic Week under the 'Azadi Ka Amrit Mahotsav' will be a grand celebration by the Ministry of Information and Broadcasting which will showcase the convergence of the values and glories of the freedom struggle of the past with the aspirations and dreams of a young, new and iconic India.