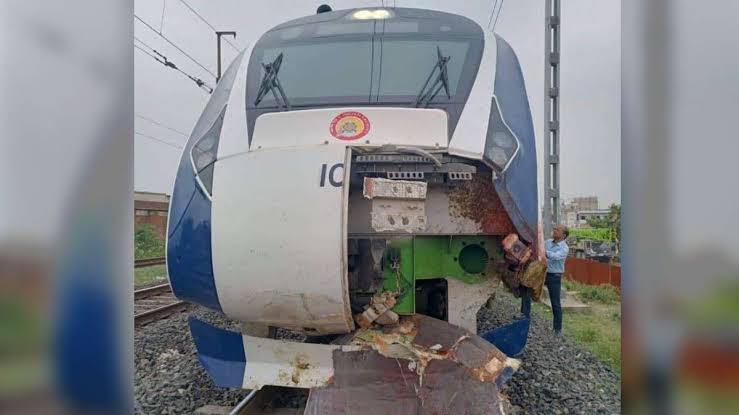 The recently introduced Vande Bharat Express train in Gujarat met with an accident on Thursday. While coming from Mumbai, she collided with a herd of buffaloes near Vatva and Maninagar stations near Ahmedabad railway station. Now the Railway Protection Force (RPF) has registered an FIR against the owner of the buffaloes for this accident on Friday. The front portion of the Mumbai-Gandhinagar Vande Bharat Express was damaged after colliding with a herd of buffaloes. Shortly after the accident, the train was again sent to the front. Prime Minister Narendra Modi recently flagged off the new Vande Bharat Express between Mumbai and Gandhi Nagar.

The Western Railway (WR) said in a statement that the nose cone cover of the driver coach of the semi-high speed train which was damaged after colliding with buffaloes has been replaced with a new coach in Mumbai. The incident happened on Thursday at 11:18 am. This train collided with a herd of buffaloes near Ahmedabad. Officials said that four buffaloes died in this incident. After the accident, the Vande Bharat Express train remained standing for some time. The train was re-scheduled at 11:27 am.

Railway PRO Pradeep Sharma said that there was little damage due to this incident. There is no effect on the operation of the train. The train is running on its scheduled time. Sharma said that the broken front part of the train will be repaired. The train will be operated on time. Railway officials say that the Vande, who rears cows and buffaloes in Gujarat, are not aware of the time table of India. This is the reason why the herd of buffaloes came on the tracks. Now a campaign will be launched to make them aware.