The death toll in a suspension bridge collapse in Gujarat's Morbi has risen to 141 till Monday morning. Rajkot Range Inspector General of Police Ashok Yadav has confirmed this to the media. 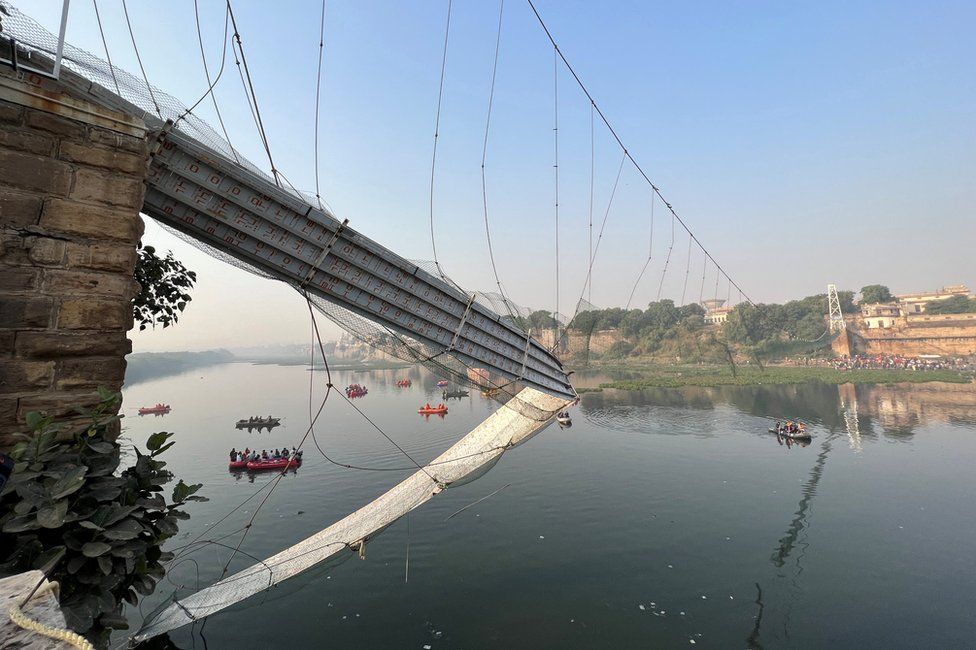 The death toll in a suspension bridge collapse in Gujarat's Morbi has risen to 141 till Monday morning. Rajkot Range Inspector General of Police Ashok Yadav has confirmed this to the media. Let us inform that around 6.30 pm on Sunday evening in Morbi district, the cable bridge over the Machhu river was broken. More than 300 people were present on the bridge at the time of the accident. This bridge was 233 meters long and about a hundred years old.

In Kevadiya, Gujarat, PM Narendra Modi said, I am in Ekta Nagar but my heart is with the victims of Morbi. I have rarely experienced such pain in my life. On one side there is a heart full of pain and on the other side is the path of duty.

Many new facts have come to light after the sudden collapse of the cable bridge on the Machhu river in Morbi district of Gujarat. It has been learned that the company that did the renovation of this bridge had opened the bridge to the common man even before the quality check. The death toll in the accident on this bridge has increased to 141. About 177 people have been rescued. Out of this, 19 people are undergoing treatment. Relief and rescue work is going on. Army, Navy, Air Force, NDRF, Fire Brigade are conducting search operations.

For the rescue work, the Air Force aircraft along with the NDRF team has left for relief operations. Another plane will be sent in an hour. Helicopters have been kept ready for rescue operations in Jamnagar and other nearby places. According to defense officials, Garud commandos have been sent from Bhuj and other places to Morbi. While 5 teams of NDRF from Vadodara have reached the spot. Even now more than 200 people are said to be missing. The police have registered a complaint in this matter under section 304. The Minister of State for Gujarat has also reached the spot. On the other hand, Chief Minister Bhupendra Patel reached Morbi on Sunday and first met the injured in the accident site and then in the hospital and inquired about their condition.