Bohag Bihu: a celebration that signifies the start of the Assamese New Year

Bohag Bihu, also known as Rongali Bihu, is one of the major festivals in the North-Eastern state of Assam, marking the beginning of the Assamese New Year. The festival begins in mid-April and lasts seven days; this year, Bohag Bihu will begin on 14th April and end on 20th April. 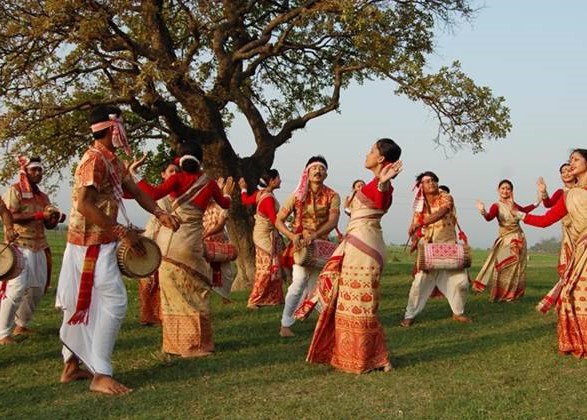 The Bohag Bihu festival in Assam is a time of celebration that marks the start of the Assamese New Year. The term "Bihu" is derived from the Sanskrit word Bishu, which means "to seek blessings and prosperity from the Gods" before the harvest season begins. It is observed for more than seven days. It begins on April 14 this year.

Bihu is classified into three forms based on the yearly weather calendar: Bohag or Rongali (April), Kati or Kartik (October), and Magh or Maghar Domahi (January). All three are linked to Assam's predominantly agrarian society.

The commemoration, which encourages ethnic diversity, is basically a harvest festival that also seeks to unite Assam's various native communities. According to the Assamese calendar, Bohag marks the beginning of Rongali Bihu, which consists of seven phases: 'Sot,' 'Raati,' 'Goru,' 'Manuh,' 'Kutum,' 'Mela,' and 'Sera.'

Furthermore, it is thought that the Bihu festival began when people began tilling the land in the Brahmaputra Valley for food.

During the Bohag Bihu, Assamese people wear traditional attire such as dhoti, gamosa, and saadar mekhela and dance in circles while singing the traditional Bihu Geet.

In Raati Bihu, women gather in an open field to celebrate around a bonfire, kicks off the Bihu festival.

The first day of this Bihu is known as Goru Bihu and is normally on the final day of the outgoing year. Farmers take their cows to a pond or river to bathe them on this day. They then coat the animals in Mah-Haldi made of turmeric powder and pulses and decorate them with plant twigs.

The second day is Manuh Bihu, when people celebrate the new year by wearing new clothes and eating sweets. Worship is held on the third Gosai Bihu. People go to see their relatives on Kutum Bihu. Senehi Bihu is intended for 'Bihuwan' lovers who exchange gifts.

Mela Bihu, as people organise fairs, marks the end of the festival.

A variety of dishes are prepared and group feasts are arranged over the course of the seven days. It is thought to have started when people began tilling the land in the Brahmaputra Valley for sustenance.

Given the rising number of Covid cases in the region, and even though the festival is being celebrated in some areas with health and safety precautions in place, it is still best to remain indoors and avoid venturing out unless absolutely necessary.